Produced by Reverse Pharmacology, MK 677 (commonly known as Nutrobal or Ibutamoren) is an orally administered growth hormone secretagogue that is designed to stimulate the pituitary gland to release growth hormone. Yes, that’s right – this stuff is able to boost your growth hormone levels.

It was originally formulated to manage health problems like osteoporosis, obesity and muscle wasting, but MK 677 has been shown to promote an increase in lean body mass as well as a boost in IGF-1 serum concentration during clinical runs.

For this reason, it didn’t take people in the bodybuilding industry very long to start using it as a way to enhance their performance.

Like most other SARMs, Nutrobal works by targeting specific androgen receptors and alters the way they function in the body.

As a result, this stimulates them in a way that can mimic the anabolic effects of steroids and prohormones. MK 677 (Nutrobal) is rather similar to peptides like Ipamorelin and GHRP-6, but you won’t experience any of the typical side effects.

This is why SARMS like MK 677 are considered game-changers in the world of fitness and in pharmaceutical science.

Aside from a dramatic change in your IGF-1 and growth hormone levels while on MK 677, you can experience many benefits from a cycle including:

Most users who have already tried taking MK 677 shared that they experienced better sleep while on this growth hormone secretagogue. They also had an increase in vivid dreaming in the process, which made going to bed much more satisfying and exciting from their perspective.

The dreams are wicked, i sometimes wish i wouldn’t wake up at times(lol)

skin when they integrated MK 677 in their bodybuilding program. Here are just a few of the positive feedback that they shared:

Had a great 30 days at 50-60mg. Sleep,skin,recovery and fullness all improved.

Still on split dose of am/pm. Dropped to 20mg for each dose, totalling 40mg per day. Skin has really cleared up and tone is even.

MK 677 users relate that they noticed positive changes in their overall physique in just a few days’ time while using this GHS. Apart from having their muscles looking fuller and vascular than before, the gains they are able to achieve are much more distinct as well.

If you want to know what to expect from MK 677, let me give you some information. I personally have used MK 677 and let me tell you, it is good stuff. The MK 677 Results are so amazing because of the fact that it not only improves your HGH levels, but it can also improve sleep/appetite.

For some people, getting 8 hours of sleep can be a real problem. Trust me when I say that won’t be the case when using MK 677. Because you get longer and deeper periods of rest, your body will also be able to restore much better. 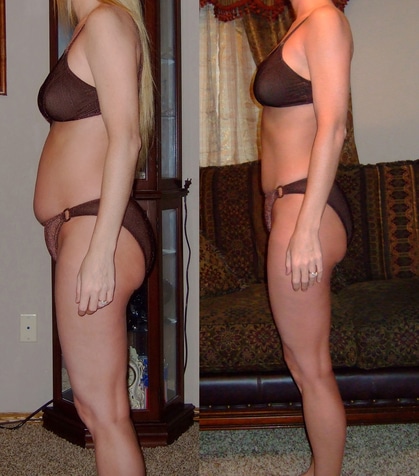 These images really speak for themselves. There is a real significant amount of fat loss in both individuals and we all know how hard it can be to lose excess fat.  If you want to get the same MK 677 results, make sure to run the dosage for longer periods of time. Users recommend starting out with 10 to 20mg to see how the body reacts to MK 677.

It is also said that MK 677 is great to stack with other SARMs such as MK-2866. These two are often used together to create a synergetic effect.  I personally don’t have any experience with stacking those two together, but I am planning on running them shortly.

My own MK 677 results were great. I experienced all the benefits you should get from Ibutamoren. Besides sleeping like a baby I also gained a good amount of lean muscle mass. Keep in mind that I did run MK 677 for about 3 to 4 months at 20mg.

MK677 does wonders when it comes to muscle growth and new muscle cell development. There are hardly any stimulants present in the market that help you bulk up without water retention and fat gain. But this compound does not involve any such side effects and is, therefore, one of the best options you should go for during your bulking phase. This compound should definitely be added to your diet. It does not only develop your existing muscle cells but also adds new muscle cells. Also, it considerably improves your recovery time and thus helps you with weight lifting.

This is a benefit that most people don’t know about. This hunger hormone helps you shred your fat real quick. You can add this hormone to your diet along with other hormones to stave off your cravings. This compound will help you gain hard muscles without any risk of fat gain or water retention.

Studies have already been done on dosing the of MK 677 ranging from 10mg all the way to 50mg.

What they found is that while the HGH levels were NO HIGHER than at 50mg than those who took 10mg, it DID show an increase in IGF levels.

What this suggests is that for general fat burning and stamina, 10mg is sufficient enough to improve HGH levels and see results.

But if you want a little bit more of the muscle-building effects, a higher IGF level will be effective and you might consider increasing your dosage to up to 50mg.

As a general guideline, most users suggest a sweet spot of about 25mg per day, which could increase IGF levels by as much as 80% during the first 30 days at 25mg.

This compound is available in form of tablets and should be taken at a dosage of 25mg per day. You can split this does into two intervals; one in the morning and one in the evening. Some experienced users increase their dose up to 50mg or in rare cases to 75 mg per day. However, you should stick to the recommended dosage.

Tip: Take it right before bed for maximum effect and some extra dreaming benefits.

I have never really heard of anybody experiencing serious MK 677 side effects. Of course, you can expect to feel some nausea after you have taken it. At least, that is what I felt when taking my first dosage. But that was because I was feeling a little paranoid.

Compared to other products that stimulate the elevated amounts of growth hormones in the body, MK 677 (Nutrobal) can cause the following side effects:

Increase in appetite. Some users experience increased hunger when running MK 677. However for me personally, it was manageable. Just make sure you eat the right foods which will fill you up nicely.

Temporary bouts of lethargy. You can experience some lethargy throughout the day when you are taking Ibutamoren. This usually only lasts a short while and a good cup of coffee should help you through it.

Numb hands. Some users have also reported numbness in hands. But then again, this can be managed easily by lowering your dose. This is because of the elevated growth hormone levels in the body. It might seem a bit scary at first but then you will get used to it.

Some claim it could lower GHIH levels, but that’s still to be determined.

Any compound that increases your Growth Hormone and IGF-1 levels naturally is bound to trigger a few unpleasant reactions from your body. However, MK677 is a mild compound and therefore is safer than its counterparts. The only nasty side effect that you can expect with its use is extreme lethargy. But don’t worry, this side effect isn’t unmanageable. You can reduce your dose for some time to reduce the intensity of this side effect.

Where to Buy MK 677 (Nutrobal) Online

Most of the most trusted distributors have halted their businesses after the ban of  SARMs.  They are, however, still available through a few distributors. If you want to experiment for yourself and see the incredible power of a SARM like Nutrobal, you can buy MK 677 supplements online right here at Powersupps UK.

I think MK 677 is a SARM that you should go for based on four (4) key factors: ease of use, efficacy, minimal side effects and clinically proven results. With its ability to boost HGH levels, it’s almost as if you’re taking HGH itself.

If you’re still zeroing in on a SARM to go for, Nutrobal is definitely an option you should consider.